“THE FOREST / IS HEAVY FOR A CATCH,” writes Joseph C. P. Christopher in his poem, “Hunters and Love”; and true to this affirmation, this auspicious issue is indeed loaded. The first time I heard about Lunaris Review, I had just gained admission to study at the University of Ibadan. I had no idea of what literary journal publications were all about, so it was one of the first few literary journals I knew. My older sister (the publisher’s colleague then) encouraged me to submit but I didn’t understand the concept of ceding the control of my works to others. Years later, Lunaris Review continues to engage in the conversation by consistently publishing quality literature that’s friendly to new and promising writers. But this issue offers much more than just promises.

Every literary endeavor should close a distance without losing the immateriality of the imagination itself. But when the writer goes ahead to close the gap between the characters who occupy polarized spaces (without diminishing the thematic allegiance of the story), we should be quick to praise such skill. We should be quick to appreciate the editors’ keen eyes too, and the journal’s generous space. Timi Agboola’s story, “My Mother’s Wife” reels out a kaleidoscope that’s both serious and playful at the same time. He writes such a beautiful prose executed by an admirable craft:

“Mama and our sisters were in the kitchen, making war with the pots. Soot on their faces”

When you unwrap this new year’s gift, you should expect to be haunted by the trained melancholia that never drifts into the abyss of the maudlin or transactional emotion. As you dive from Okolo Chinua’s “My Country as a Moving Burj”’s “I once opened my eyes and saw darkness,” you will be held “by two tiny threadlike handles” in Onis Sampson’s “Of Tamarinds and Yearnings”. To lessen the risk of reviewing this issue, we should leave it to the readers’ prerogative whether this selection is foolproof. The work of reading and evaluating submissions is difficult already for both editors and writers, for the reading experience to come up short. There are no absolute guarantees here, but we can say that the harmony and sequence in this issue, the vulnerabilities of each story and poems narrated are as artistic like the substantive creative pieces included here. 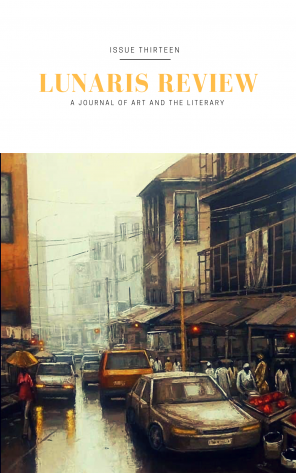